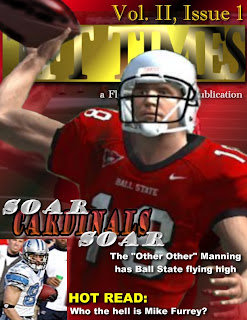 Hey it's back! TFT Times returns for a second year! The first Volume of TFT Times ran a crappy three issues. Will 2007-2008 be kinder to the storied publication? Only time will tell!
Posted by Matt Adams at 2:14 PM No comments: Links to this post 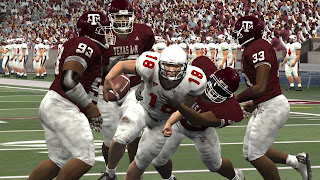 Who's the Manning? John Manning (18) drags defenders into the endzone during his six-yard TD run. Manning hit paydirt six times in the game, the five others were via the air.

"It really wasn't that great of a game. I mean, yeah, we won, and beat the #2 team in the country, but I'm not satisfied with the way we played."

"We ran up the score out of frustration," Adams admitted after the game, referring to the Cardinals' 28 fourth-quarter points.

"The turnovers, they were unacceptable. (Quarterback) John (Manning) has to play better. Four interceptions? I think he watched game film of his brother's (Peyton's) rookie season (in the NFL)."

Brandon "Ugly" Petty got the game started off on the right foot, coughing up the opening kickoff, which Texas A&M recovered. The Aggies scored a touchdown off a 16-yard pitch left to tailback Darien Barrett.

Then, usually sure-handed senior receiver Corey Olson fumbled a punt return while trying to break a tackle. That led straight to a Texas A&M field goal, paving the way for a 10-7 first quarter deficit.

But perhaps most enraging for the coach was the play of his quarterback. Manning threw four interceptions, two of them on the cusp of scoring drives.

"I just misread the coverage. And I tried to force it to (tight end) Joe (Jordan)," Manning said, toweling himself off after the game.

Manning failed to mention Jordan wasn't even in the game for three of his interceptions. The frosh phenom went down hard midway through the first quarter, and didn't return until the fourth quarter was well underway.

One of the interceptions was meaningless, coming at the end of the half. But Coach Adams disagrees.

"I disagree with 'meaningless.' It could've easily been returned for a score. John (Manning) has got to stop calling audibles when we're trying to run out the clock. It's unacceptable." 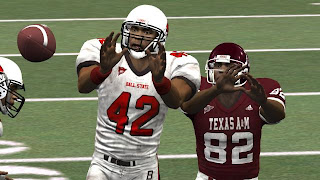 So, was Adams satisfied with anything his quarterback did?

The Coach has been upset with the senior cornerback's recent play. Bryant hadn't picked off a pass during the first two games of the season. That's uncharacteristic for college football's all-time interception leader. Also recall, Bryant decided to skip the draft after his phenomenal junior year to pursue a national championship.

He was back in form in the fourth quarter, picking off an errant pass and returning it for an 18-yard touchdown. It was his second pick of the game.

Not enough to satisfy his coach.

"He didn't take the first one back to the house. And only God knows how many interceptions he didn't make in the first two games," Adams said.

Six turnovers overshadowed what would've been another stellar day for John Manning. He completed 20 of 30 for 372 yards and five touchdowns. He also added a rushing touchdown, one of his eight carries for 62 yards.. And then there were those four interceptions...

"Just have to clean it up. We're 3-0 right now. But we can't turn the ball over like that and expect to win. At least, not in the non-MAC games," Manning said.

The Cardinals face rival Miami (OH) next game.
Posted by Matt Adams at 6:35 PM No comments: Links to this post 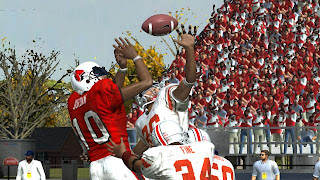 Grab Air: Joe Jordan grabs a 53-yard pass in the
first quarter of BSU's blowout against arch-rival Ohio State
MUNCIE, Ind. - You've got to hand it to Joe Jordan: the freshman tight end sure knows how to put on a show.
"Ah, it's nothing man. I just go out there and make plays," Jordan modestly admits while toweling himself off after a quick, warm shower.
Nothing?
How about a Ball State record 305 yards receiving?
How about 12 catches in his second career game as a Cardinal?
How about three more touchdown grabs, bringing his season total to six?
How's that for nothing?
"Really, dude, it's cool. Peyton, er, (quarterback) John (Manning) and I spend hours together late at night perfecting that onfield chemistry. Just lots of in and out routes, you know?"
The dynamic duo is certainly turning heads around the NCAA. NFL teams are noticing how big Jordan plays. Like the 53-yard catch he made while towering over three Buckeye defenders?
"He (Manning) should never have thrown that ball," BSU Coach Matt Adams said. "But hell, if Jordan's gonna keep catching those, I guess it's okay. Just wish that arrogant little piss would start reading coverage instead of running to his security blanket. And I'm talking about Manning."
Through two games, Peyton's little-little brother has been nothing short of spectacular. His performance against Ohio State will become the stuff of legend: 24-28, 455 yards, 6 touchdowns. It's the kind of performance that helps a team clobber a much-hated rival, 42-21. And, unlike last game, not a single pick for the Heisman hopeful. On the season, he's 43-54 for 812 yards, ten touchdowns, and a single interception.
"I'm just taking what the defense gives me," Manning insisted. "Except when, well, nobody's open. That's when I chuck it deep to Joe. Coach hates that."
No one seems to be able to cover Jordan at the tight end spot. Ohio State triple-teamed him, and the big target still came up with huge grabs. 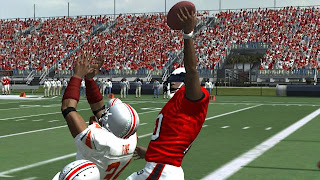 "Just too many weapons out there. We could drop 11 guys and Jordan would still catch the damn ball," an embarrassed Jim Tressel admitted. "Swear to God, just give me Michigan every damn week instead of that freak. I heard he runs the 40 in 4.3 seconds. He's goddamn 6'5"! Christ our Savior, what do you do against that?"
Shrivel like little girls, coach.
So far, the Cardinals have faced off against two ranked Big Ten squads. So far, they've owned their opponents.
"I feel sorry for every MAC team that's going to take it up the ass," Tressel lamented while tugging at his sweater vest. "But thank the maker they're not in the Big Ten. No one would stand a chance."
Up next for the Cardinals: #2 ranked Texas A & M at Kyle Field in College Station, Texas.
Posted by Matt Adams at 4:41 PM No comments: Links to this post

It wasn't supposed to start like this for the #2 ranked Michigan Wolverines. Certainly not at home. And certainly not against Ball State.
But the Wolverines learned a valuable lesson: never underestimate an opponent with a Manning and a Jordan on his side.
The #20 Ball State Cardinals soared high in the Big House, leaving a Maize and Blue trail of blood from endzone to endzone and sideline to sideline in the Wolverines' home domain. And, as mentioned, it was a Manning and a Jordan doing most of the damage in the 49-7 thrashing.
Heisman hopeful John Manning, the unknown and unheralded fourth brother from the storied Manning family (he was an accident), cut up Michigan with an arsenal of offensive weapons, including his favorite target, Matt Matthews. The jazzed up junior reeled in 5 catches for 114 yards.
But Matthews had better watch out. Manning, who audibles and gesticulates in the MAC as his brother Peyton does in the NFL, apparently has a new favorite: a guy named Jordan. 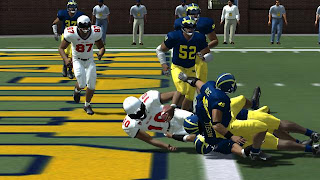 Joe Jordan (pictured crossing the endzone for his first collegiate TD) made like Mike in his NCAA debut, finding the endzone three times and lighting up the stat sheet with ten catches for 207 yards. Michigan had no answer for the athletic 6'5" freshman tight end. The effort included TD catches of 52 and 64 yards.
Jordan's got speed. Just ask Michigan linebacker Ashley "the Doc" Frasier, who spent his afternoon chasing fruitlessly after the freshman.
"I've never seen someone so large run so quickly. He had a rocket up his ass," Frasier said in bewilderment while toweling himself down after the game. "Dude's got game. Dude's got game."
Manning's sole miscue came in the second quarter, when he underthrew Matthews on a flag route. Michigan corner Roy Campbell picked it off. It was part of a shaky 5-12 start for Manning. His final numbers, however, were astonishing: 19-26, 355 yards, and four touchdowns. Three of those went to the freshman Jordan.
Michigan looked like it had everything under control to start. After the opening kickoff, the Wolverines marched 75 yards downfield in little more than a minute, torching the Cardinals for two long receptions of 53 yards and 20 yards to junior Edward White.
Then, the game turned on a dime.
On the ensuing kickoff, Ball State freshman Bryce Petty fumbled. Junior Anthony Huggins recovered. He fumbled as well, falling awkwardly on his right arm.
Petty made lemonade.
He scooped up the ball, and raced 63 yards to paydirt.
Just like that, the game was tied at seven.
The Cardinals never looked back in the dominating win. Unfortunately, on the very same play that catalyzed their win, Ball State also lost an All-American. Huggins, last year's #2 receiver, broke his arm in three places. He's out for the year.
But Ball State Coach Matt Adams says not to worry. 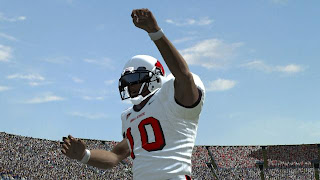 "Losing Huggins sucks, man. But we recruited three All-Americans in the offseason. We're deep at that position. Dude, did you see Jordan? That guy...next Antonio Gates. 6'5", jumps like a little girl watching Jurassic Park. Man, I'm glad I saved him from a basketball career at Duke," Adams said.
"Coach K will never forgive me for that."
The key to the game?
"Getting John Manning's head out of his ass. He should've never thrown that interception. And what was with all those pump fakes? If he'd throw the ball when I wanted him to throw the ball, he wouldn't have gotten sacked three times. You know Archie's going to be all over my ass for that. But if his golden 'accidency' would just throw the ball, he'd be fine."
The Cardinals host Ohio State next.
Posted by Matt Adams at 2:37 PM No comments: Links to this post