So is Tom Terrific.

Wow, it's going to be a battle this weekend!

The Colts have started off the season in a great way once again. So have the Patriots. They've done it in completely different ways...the Colts have eked out a couple of wins and relied on a good defense and running game. From what I've seen, the Pats have passed, passed, passed their way to an undefeated record. Of course, that New England defense isn't bad either! The AFC Championship Win last year was one of the most incredible things I've ever seen. In some ways, I can't really believe it happened at all.

This is a different year. I think the Colts are better. Their defense is healthy and physical. They've still got a one-two running back combo and terrific receivers. Their focused, unwavering, and they don't get rattled. They're the gentlemen of the NFL, though that distinction may not be the best thing to hold in the brutal & manly world of pro football.

The problem? Well...the Patriots are better, too. Anyone who says otherwise is insane. They already had a good offense, now they have a dynamic one. It's amazing how potent they are. Don't get me wrong, I hate them. I hate Brady, I hate Rodney Harrison, I hate their sadistic coach. But I can't deny they're good. They're scoring points in bunches, and Washington was supposed to be a "defensive test" for them last week.

52-7 was the final score, and that was only because Washington scored a late "F-You" TD at the end. The Patriots are running it up like USC.

I know there's another end to the spectrum. There are people out there who don't live in the greater New England area who hate Peyton Manning. But the ESPN mouthification that Brady is receiving is legendary. Aw, hell. It's a media wide mouthification. In fact...here are a few things you may have missed:

-while running up the score against Washington, Tom Brady laid his hands on a lame man who walked again
-while running the score up against the Dolphins, Tom Brady fed the entire crowd with only fishes and loaves
-Tom Brady uses a rattlesnake for a condom; wait...no that's Chuck Norris; Brady doesn't use those things...just ask Bridget Moynahan
-as evidenced by the atrocious hat he wore during postgame interviews over the weekend, Tom Brady likes to play Sherlock Holmes, solving crimes in his spare time
-Tom Brady has the ability to cure cancer, AIDS, and syphilis just by thinking about it, but Coach Bill Belichick won't let him do it because Hoodie is pure evil
-Tom Brady is single-handedly responsible for ending the Cold War
-Tom Brady takes a lot of heat off his offensive line by generating a protective forcefield around
himself
-Tom Brady faced off against Chuck Norrs, Master Chief, and Jack Bauer at the same time and still won
-if Tom Brady is ever injured while staying in the game too long, it won't matter because he can heal himself with his divine powers

So dear friends and Anti-Patreeites, remember these words of wisdom from Christopher Walken... 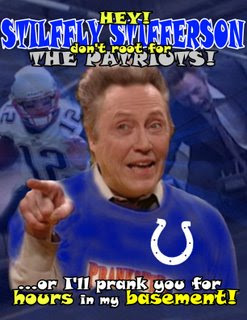 Posted by Matt Adams at 1:23 PM No comments: Links to this post 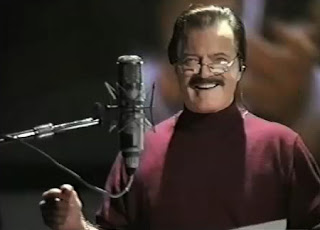 First of all, a warm tribute to the one and only Robert Goulet. He's one of my boys, one of the guys I listen to a lot. If you haven't heard, he has passed away after failing to get a lung transplant. He needed one because of a rare and debilitating lung disorder. His booming voice and warmth will be missed for a long time to come. Don't know who "GOULET!" is? Well, pick up a Best of SNL Will Ferrell DVD, Beetlejuice, or Naked Gun 2 1/2: The Smell of Fear. Even better, visit http://www.robertgoulet.com/ to send a message to his family or check out his biography. His storied career includes stage, screen, and vocal performances. And, if you fall asleep at work, he messes with your stuff. It's true. I even saw a commercial on this.

And, if anything, check out these awesome ESPN college basketball commercials he did...if just to look for the young Coach K.
Why does Robert Goulet matter to me?
In college, I had a radio show on our low-powered station at Franklin College in Franklin, Indiana. The show featured crooners, those legendary performers like Frank Sinatra, Dean Martin, Perry Como, and of course Robert Goulet. I think it was in 2002 that I decided I wanted some promos from some of the artists I featured. I did some hunting on the internet, found his website, and submitted a simple question, "Would you be willing to do some spots for me?"
Within a few hours, I had a reply from his wife Vera, telling me to send a script and an address. A few days later, I received an audio cassette. Not only did Mr. Goulet do my scripts, he improvised a couple of his own. Now, many of my college contemporaries didn't think it was that big of a deal; I was in my early 20s at the time, and of course many of my friends didn't know much about Robert Goulet unless I mentioned Beetlejuice or The Naked Gun 2 1/2. But it meant so much to me to have Robert Goulet, THE Robert Goulet, saying, "This is Robert Goulet and you're listening to the Saturday Morning MattPack on 89.5 WFCI."
I was able to get about three or four promos from the tape he sent. You could tell he was having a great time doing it. It probably wasn't a big deal to him, but it said a lot about his character: he didn't care it was a small radio station, he was unassuming and took it with class, humility, and a grand sense of humor.
And that's why I will always be a fan of Robert Goulet, and why the loss hits home for me.
Plus, I enjoy the fact the U.S. and Canada haggle over which country should be considered his home! Mr. G was born in Massachusetts, but moved to Canada early in life (his parents were Canadian). Yet his voice is considered a National Treasure here in the U.S., to Canada's dismay.
Sing on, Mr. G.
Sing on.
Posted by Matt Adams at 12:50 PM No comments: Links to this post 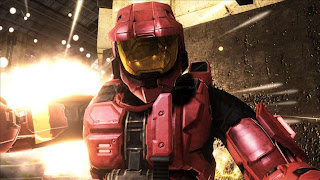 Okay...I've been negligent. I haven't even lived up to doing Colts observations consistently. I blame a lot of things: Halo 3 (after getting fragged repeatedly, I finally became MVP of a match!), Netflix, the new TV season (specifically, The Office, Heroes, Chuck, Journeyman, and 30 Rock), and Halo 3 (did I mention the MVP thing?).

Oh...I also wrote a book for a contest on Amazon.com...that took up six straight days of my life.

I'll try to do better. You know, like I always say here on TFT. I make no promises of new and exciting content. Maybe I'll try to edit some pictures or something.

And when I have the time, you'll enjoy the Netflix Movie of the Week. You know...the weekly feature that's run ONCE so far.

I suck.
Posted by Matt Adams at 8:28 AM No comments: Links to this post

But at what cost victory? Sure, the Colts beat Denver 38-20, and sure it was laughable by the end. However, five pretty big-time Colts players suffered injuries: Marvin Harrison, Rob Morris, Joseph Addai, Bob Sanders, and Ben Utecht. We've got strained and bruised knees, banged up shoulders, broken ribs...a cornucopia of injuries. Some look serious, others don't. Let's just hope this doesn't come back to haunt the Colts down the road.

A really bad run. Colts looked pretty bad on run defense in the first half. A lot of missed tackles, overpursuit...the kinds of things that made the defense a complete joke last year. Even All-World Bob Sanders was missing tackles left and right. They cleaned it up in the second half, thankfully. To be fair, the Broncos did give the Colts a lot of interesting looks and formations.

Ready to run. Kudos to the offensive line for controlling the line of scrimmage. Whether your name was Joseph Addai, Kenton Keith or even Luke Lawton, chances were you had a pretty good game on the ground. Very dominating performance.

Fletch lives. I've used this title a lot. But with Ben Utecht out, Bryan Fletcher brought a little instant offense with a couple of questions. I love all the Colts' tight ends, but I'm sometimes befuddled as to why the Horseshoes stick with Utecht when Fletcher tends to be the big-play guy.

This week on Dallas...Dallas Clark had another solid week. Another two touchdown catches. The dude's a machine, and I think he's been Manning's favorite target this season. I also loved how the Colts moved him around...on the line, in the slot, even split out wide! Yep, I saw a formation with Clark split out right, Harrison in the slot, and Reggie Wayne to the left. No matter who covered him (safeties, linebackers, corners), he was open and able to make a big catch.

Productive but not prolific. We've seen Peyton light up the Broncos time and time again. This time, he was productive, but didn't put up eye-popping numbers. The Colts have been so firmly ingrained in the Broncos' heads, that it reminds me of how the Patriots seemed to have the Colts' number for years (that curse is now broken, thank goodness). But the Colts have dominated the Broncos...even embarrassed them...time and time again. Whether it's the playoffs or the regular season, the Broncos can't seem to beat Indy. You'd think Mike "the Mastermind" Shanahan would've figured something out by now. It's just that...no matter what they do...the Colts do it better. This game was set up perfectly...run, run, run, control the clock, keep Manning off the field. Yet...it's 14-13 at halftime. Amazing.

Super subs. Very nice performances put in today by a variety of backups, whether you're talking about Matt Giordano, Kenton Keith, Aaron Moorehead, or Rocky Boiman. With injuries, the Colts proved they actually have a lot of depth. If some of those injuries turn out to be serious, then they're really going to need to call in the reserves.

Ugoh, I go. One thing Tony Ugoh's got going for him: even if he's not a mountain of a man like Tarik Glenn, he brings a lot to the table. Loved seeing him and Jeff Saturday running 20 yards downfield to block the Broncos. Simply awesome.

Booing Brandon. Did the boo birds come out for Brandon Stokley? C'mon Colts fans! I mean, yeah, he's not with the Colts anymore. But it's not like he went for the money. In fact, the Colts cut him! So give him a break.
Posted by Matt Adams at 11:04 AM No comments: Links to this post