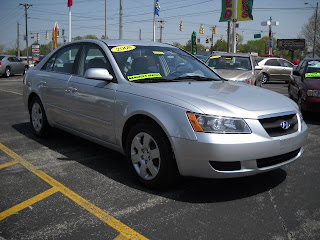 Meet the Hyndai Sonata, the newest member of the family.

This silver wonder is whisper-quiet and, more importantly, has no trouble starting. The trunk space is incredible...if any mafia types need to hire me for a few side jobs, I could hide plenty in it. In addition, I can sit in the back seat without having my knees touch the front seat...quite an accomplishment (although I wouldn't know why I would need to ride in the backseat of my own car, I'm trying to prove a point--it's spacious).

Obviously, I haven't driven it a whole lot, so I'll need a week or two in my work commute to truly shake it down. However, I'm quite pleased with my purchase so far. If I had one complaint, it'd be a real nitpick: I wish the car had an audio auxiliary input for my MP3 player. That feature comes standard with the 2010 and 2011 models. Obviously, I bought a 2008, so that feature isn't there.

It does, however, feature a moonroof...an amenity I've never had in a car before.
Posted by Matt Adams at 11:26 AM No comments: Links to this post

Ode to Grand Am 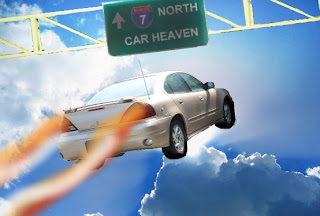 Let us pause for just a moment to remember the 2003 Pontiac Grand Am SE that never quite lived up to its potential. A car so unreliable that the only certainty was taking it to the repair shop.

I shall mourn the loss of this Grand Am.

Oh, the times we had!

The time Grand Am died on the interstate.

The other time Grand Am died on the interstate.

And the time after that.

And there were more charms...

The faulty driver's side window seal that constantly hissed.

The squeaking suspension that whined with every twist, turn, bump, and crack.

The constant guessing game surrounding how many tries it would take to start the car...Grand Am's favorite game in recent months.

*actual Grand Am does not fly; if it did, I would never, ever trade it in...additionally, if Grand Am did fly, it could be quite dangerous, since the beloved car's engine has a tendency to randomly shut off--dangerous if you're on the interstate, DEADLY if you're in the air
Posted by Matt Adams at 2:50 AM No comments: Links to this post