There are the Oscars, the Golden Globes, the Grammys, the People's Choice Awards, the CMAs, and every other prestigious award you can think of. And then, there's the most prestigious award of all: the Studicus Selects 2010, a random collection showing the ups and downs of the year through pictures, videos, and other stuff. I mean, we're talking high-class.

I usually do this on the cusp of the New Year, but as I was sick last week, I didn't get around to it. So now I proudly present: Studicus Selects 2010.

A belated Merry Christmas and Happy New Year to everyone!

(You can check out the Studicus Selects archives below. Scroll down for this year's "winners.")

Worst Upgrade, Cell Phone Category: I upgraded my iPhone 3G to the new iOS and let me tell you, my phone did not like that; not at all. Programs stuttered, the Netflix streaming video app didn't stream more than five seconds at a time, and my phone laughed at me when I tried to multi-task. I downgraded my phone to the previous iOS (hey, internet tutorials are fun!)...and then realized I hadn't saved my phone contacts anywhere. If you haven't heard from me in a while, now you know why: I lost your phone number because I am stupid.

Best Video Game Sequel, Games I've Played Category: Mass Effect 2. I loved the first Mass Effect game. I beat it four different times with four different Commander Shepards. I beat it on its hardest difficulty...something a reflex-challenged video game chump like me only does when he loves a game. Mass Effect 2 wasn't quite as thrilling as the first game...there's something about the first part of a series that's so satisfying, to dip into a new world you knew nothing about before and immerse yourself in it. Mass Effect 2 didn't have that effect on me because there weren't as many "new" things to discover. I still played the crap out of it and even liked the stupid mini-game where you scan for elements. The hardest difficulty setting kicked my butt, however.

Best Video Game, Nostalgia CategoryBOOMSHAKALAKA! NBA Jam returned this year, thanks to EA Sports and greed. There's a long story about this...NBA Jam was originally going to be a Nintendo Wii exclusive and a downloadable game for the Xbox 360 and PS3. However, the new NBA game that EA planned to pawn off on fans--NBA Elite--turned out to be a flaming dog-bag of crap, and EA decided to cancel the game. NBA Jam became a full-fledged title for the two HD systems. I haven't played all the way through it yet, but I can kind of dominate with the Pacers as Danny Granger and Mike Dunleavy. HE'S ON FIIIIIIIIRE!

Biggest Letdown, Cinematic Experience: Iron Man 2. I loved the first Iron Man. Loved, loved, loved. So, my expectations where unrealistically high for the sequel, which packed too many new characters into a movie that also tried desperately to be the setup for the mega-team-up "Avengers" movie. I watched it again the other day--it's a good movie--but it's missing some of the "fun factor" that the first Iron Man had. It just feels like they tried to pack in too much stuff, Tony Stark wasn't quite as likable of a rogue, and the middle of the movie dragged tremendously. I didn't hate it...but I wasn't enamored with it either.

Best Purchase, Entertainment Category: I'm an amateur Photoshopper and even more amateur video editor. So amateur, in fact, that I do not use Photoshop, but actually Corel Paintshop Photo Pro X3 (actually, I used to use Ulead Photoimpact, but when I got a new computer, the license wouldn't transfer, so I had to buy a new program). I also played around with the demo for Corel Videostudio Pro...and discovered a bundle deal that included both programs for a good price. So, I started churning out videos (all of them are embedded below). I haven't put together a video in a while because I've been writing a lot more...but there's also the fact that the Colts haven't lost a game since I stopped producing them. So there's that.

Most Surprising Non-Award, Non-Existent Writing Career: If 2010 was anything, it was the Year I Wrote. The coolest thing was seeing four of my short stories get published in separate anthology series. The "non-award" referenced in the title concerns the story "In Memoriam," which took the coveted Editor's Choice award in the Autumn Issue of "A Thousand Faces." Other stories--"The Bank Loan," "Rise of the Super-Hero," and "The Stuntman"--were also published (see here and here).

Here's a brief summary of each story that's found its way into print this year:

In Memoriam: The loss of a firefighter stings a community; more so, after the man's double-life as the mysterious "Wraith" is revealed. Those who know the man mourn his passing during a memorial service and all witness a chilling sight that defies explanation.

The Stuntman: Thrilled that Hollywood plans to make a movie about his life as the Amazing Marvel, Stan Kirkpatrick presses his agent to land him the starring role. The producers have a different idea, hiring a rising, hot-shot star, and relegating Stan to the role of indestructible stuntman.

The Bank Loan: Frustrated at his inability to get a bank loan, Baron Gallant confronts the loan officer who refused to sign off on his request. The loan officer soon learns why the superhero needs the money after Gallant's rival begins ransacking the city.

Dawn of the Super-hero: Over the course of an extraordinary week in the 1930s, a Midwesterner learns about the rise of super-powered beings around the country through newspaper accounts and radio reports. But when the world's first "super-villain" threatens to destroy New York, the man's thirst for knowledge is overtaken by his will to act.

And, perhaps more exciting, I'm not finished yet! Two more stories have been accepted for publication in 2011. One of them comes along with an actual check!

The Villain: The Blue Avenger and his arch-nemesis Heckler engage in their final showdown, and it looks like the villain has the upper hand. Memories of their past encounters assault the Avenger, who retraces the bitter steps leading up to their final fight, culminating in a desperate act that will forever redefine the hero's crusade against crime.

Absolution: Paralyzed after saving a woman under attack by two thugs, a man gets a second chance from on high. Armed with a divine mandate, he takes the name "Absolution" and embarks on a single-minded quest to rid the world of the wicked and corrupt.

Best Investment, Non-Existent Writing Career: I attended the 2010 Midwest Writers Workshop, and it was money well spent. I learned a lot about the writing business, got some good advice, had my work critiqued by a couple of agents, and even had a request for one of my book manuscripts. The request didn't pan out, but it means that I'm on the right track when it comes to pitching my work, writing summaries, and formulating my book synopsis. I'm especially tickled by the following picture showing yours truly sitting with author Dan Johnson during a round-robin table discussion! 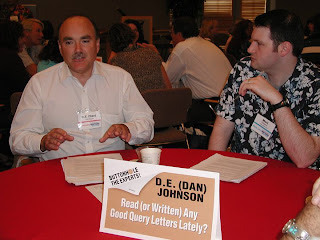 Biggest Letdown, Sporting Event: Let's face it, 2010 didn't get off to the best start. First, the Colts lost to the New Orleans Saints in the Super Bowl, spawning that commercial showing Tracy Porter's interception that plays 8,000 times during an NFL broadcast. It's like a knife jabbed in my back...and then twisted, twisted, and twisted. BUT WAIT! There's a tie for this category: Butler's heartbreaking loss in the NCAA Championship Game. Oh man...the Bulldogs will probably never, ever get there again. Coach Norman Dale even provided the team with some reminders, but Butler couldn't pull it off. Although, thanks to Sports Science for interrupting the Butler-Duke rematch to show us how close Gordon Hayward's shot almost came to going in. That didn't sting at all. I'm still proud of both teams...it's just, when you get there, you need to make the most of it. You never know when you'll get there again.

Best Purchase, Reliable Auto Category: After my Pontiac Grand Am betrayed me, I had to do something drastic. I'm talking something Fredo-style. So I took Grand Am fishing...and...well, you know the rest. In his place came our 2008 Hyundai Sonata. It's quiet, fuel-efficient, and awesome. I'm a boring guy, and it's a boring car. We're a perfect match. 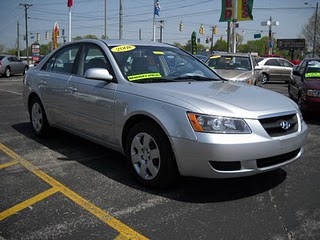 Longest Ear-Chewing Moment, Wife Category My wife went on an epic journey to Sandusky, Ohio, to see a man I've barely even heard of. His name is Peter Facinelli and the ladies tell me he's oh-so-good-looking (and from Twilight). Six hours, two bathroom breaks, and two trip-interrupting train stops later, she and a friend stood in line to see Mr. Heartthrob himself. Hugs were given, autographs were signed, and I haven't heard the end of it. STILL. 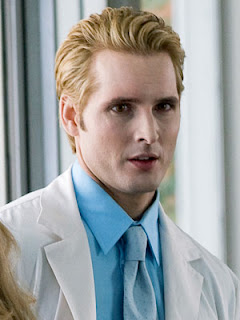